The monastery was decorated with an enormous number of frescoes, altarpieces, paintings, around 7500 relics in 507 reliquaries, mostly designed by Herrera and the silversmith Juan de Arfe , and collections of books and manuscripts that now number around 45,000 and 5000 respectively. Many of these items have changed their location or have been lost.

The fixed and movable decoration of the church at the center of the monastery, with its celebration and veneration of the saints, martyrs, images, the deceased and the sacraments, and its emphasis on the Virgin as Mother of God, is very much in keeping with the didactic spirit of the Counter-Reformation and its use of images as an exhortation to prayer.

Continuing concern over clarity and appropriateness is reflected in contracts and written reports and resulted in successive substitutions of works that had already been executed and continuous corrections of detail, such as that by Juan Gómez Villaseñor. 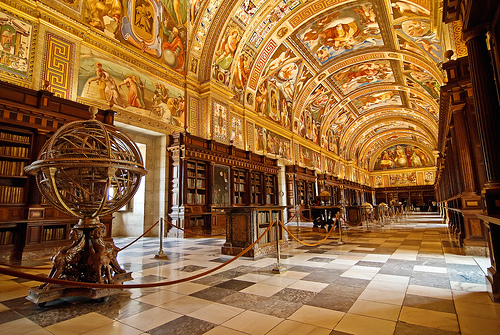 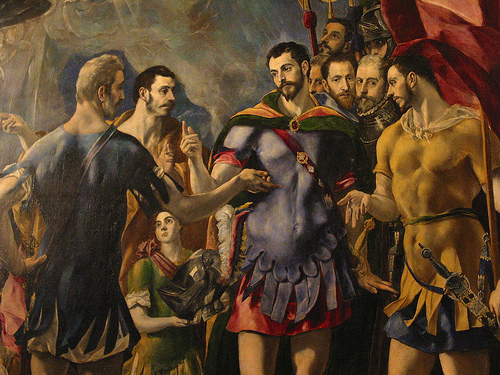 El Greco The Martydom of St Maurice and the ThebanThe monastery’s most important decorations are in the Patio de los Evangelistas, which is named after the four marble statues of the Evangelists, carved by Juan Bautista de Monegro, set in the tempietto.

The figures represent the propagation of the faith, while the garden and the four pools symbolize Paradise and its rivers.

The cloister walls and the staircase are painted with 62 episodes from the lives of the Virgin, Christ and the Apostles:

The sacristy contains Titian’s Christ on the Cross. The vault was painted with grotesques by Nicolás Granello and Fabrizio Castello, as were the chapter rooms, where Titian’s Gloria was hung in 1574, together with Navarrete’s St Jerome in Penitence, Flagellation, Martyrdom of St James, Adoration of the Shepherds and Holy Family.

The vault in the lower level of the prior’s cell is decorated with grotesques and a Judgement of Solomon by Francesco da Urbino, while in the upper level was Navarrete’s Baptism. Titian’s Last Supper, now in the Nuevos Museos, was formerly on the main wall of the refectory, while Navarrete’s Abraham and the Three Angels was in the locutory. The only decoration on the main west façade is Monegro’s colossal statue of St Lawrence.

The statues of the Kings of Judah, also by Monegro, are even larger, with a height of around 5 meters, and were placed on the façade of the church at Arias Montano’s instigation.

The Crucifix (1562) of white and black marble, now in an interior chapel, was originally placed in the central window of the church façade, facing the Patio de los Reyes.

The enormous library behind the west front is decorated with frescoes by Tibaldi depicting allegorical themes to a programme attributed to Arias Montano, Sigüenza and Herrera.

The vault is occupied by personifications of the Liberal Arts and Sciences, painted di sotto in sù and surrounded by giants. In the lunettes are representations of individuals, from antiquity onwards, who had cultivated these disciplines. Scenes on the friezes refer to the trivium and quadrivium. Of the former, Grammar is represented by the School of Babylon and the Tower of Babel, Rhetoric by Hercules the Gaul and Cicero Defending Gaius Rabirius, and Dialectics or Logic by SS Ambrose and Augustine and Zeno of Elea Showing the Gates of Truth and Error.

Of the quadrivium, Arithmetic is represented by the Gymnosophists and Solomon and the Queen of Sheba, Music by Orpheus Rescuing Eurydice and David Playing the Harp before Saul, Geometry by the Death of Archimedes and the Priests of Egypt Dividing the Lands and Astronomy by the Solar Eclipse at Heliopolis after the Death of Christ and King Hezekiah Contemplating the Orbit of the Sun.

Philosophy on the north wall (the School of Athens with Zeno and Socrates) and Theology on the south (Constantine the Great at the Council of Nicaea) complete the programme as the basis and goal of knowledge. The upper library is decorated with a comprehensive series of portraits of saints, pontiffs, sages and artists.

The most impressive of the staterooms in the royal palace is the Galería or Sala de Batallas, with fresco decorations by Granello, Castello, Cambiaso and Lazzaro Tavarone depicting the Battle of Higueruela, copied from a 15th-century fabric wall-hanging, and scenes from the Battle of San Quintín and the conquests of Portugal and the Azores. According to Sigüenza, the Queen’s chamber was decorated with drawings of animals and plants of the Indies and engravings by Herrera.

Throughout the complex were hung devotional paintings from the collection of 1150 works, mainly Flemish and Italian, that the King bequeathed between 1571 and 1598. These included such works as Hieronymus Bosch’s triptychs with The Haywain and the ‘Garden of Earthly Delights’ (currently both at Madrid, Prado), Rogier van der Weyden’s Crucifixion and Deposition and 14 paintings by Titian, including St Jerome and the Agony in the Garden. Many other paintings were added in the 17th century, including works by Velázquez, his Spanish contemporaries and Italian masters.

In the 1650s Velázquez coordinated the decoration and rehanging of paintings in the chapter room, the sacristy and the scriptorium. The sacristy was remodelled in order to house the retable of the Sagrada Forma, made to contain Claudio Coello’s painting of that name, and a Crucifix by Pietro Tacca.

During the reigns of Charles IV and Ferdinand VII, the ceilings in the new rooms of the royal palace were frescoed by Mariano Salvador Maella, Felipe López and Juan Gálvez, hung with tapestries from Flanders and the Real Fábrica de S Bárbara, and decorated with fine intarsia work, for example in the apartments known as the Habitaciones de Maderas Finas.

FIND A PLACE TO STAY IN MADRID